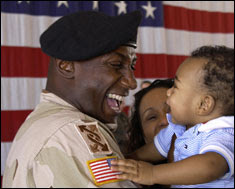 Servicemembers and their spouses are flocking to a broad array of programs to help them strengthen their family relationships as the services step up efforts to curb divorce rates.
Military divorce rates rose by .1 percent -- to 3.4 percent -- during fiscal 2008, with 492 more divorces than the previous year, Army Lt. Col Les’ Melnyk, a Pentagon spokesman, reported. Military-wide, 25,750 marriages ended in divorce last year.

The Marine Corps, with 3,077 divorces last year, experienced the biggest increase, from 3.3 percent in fiscal 2007 to 3.7 percent.

Meanwhile, divorce rates dropped .2 percent last year in the Navy and remained stable in the Air Force. The Navy reported a 3 percent rate in fiscal 2008, with 5,441 divorces representing a 618 decrease from the previous year’s number.

Comparing these statistics to civilian divorce rates is difficult, officials said, but most sources agree that about 50 percent of first marriages end in divorce in the United States. The highest incidence of civilian divorces is within the 20- to 29-year-old population, which also makes up the largest percentage of the military.

Recognizing the hardships military life often imposes -- and the challenges it can place on family relationships -- the military services are working to buck societal trends through a full range of outreach programs. The programs are offered through the services’ family support, chaplain and mental health counseling networks and range from support groups for spouses of deployed troops to weekend retreats for military couples.

The Marine Corps provides various programs and counseling opportunities to assist couples in enriching their marriages and dealing with stresses inherent in the military lifestyle, Greg Gordon, from the Marine Corps’ Personal and Family Readiness Division, said.

These include the Prevention and Relationship Enhancement Program, a two-day workshop that teaches couples how to manage conflict, solve problems, communicate effectively, and preserve and enhance their commitment and friendship. Participants begin the program by taking a marriage survey to help them evaluate their relationship and identify problems before they become serious. The four top problems generally involve communication, children and parenting, money and sexual intimacy, Gordon said.

In addition, a retreat program called the Chaplains Religious Enrichment Development Operation is designed to help Marines and their family members develop personal and spiritual resources.

The Army also has numerous programs aimed at helping couples. The goal is to build resiliency in soldiers -- 58 percent of them married -- and the families who stand by them, Lt. Col. George Wright, an Army spokesman, told American Forces Press Service.

“Military families have to adjust to more transitions than the typical family,” Chaplain (Lt. Col.) Carleton Birch, from the Army’s Chief of Chaplains Office, said. “These programs strengthen the bonds that build resiliency in Army families.”

The centerpiece of the Army program is “Strong Bonds,” a program initiated by commanders and led by chaplains that helps soldiers and their families build strong relationships. Strong Bonds has four parts: a general couples program, programs tailored for couples preparing for or returning from deployments, and programs for families and single soldiers.

Much of the training is provided in a retreat-style format so soldiers and their families can get away from their daily routines “to focus on their important relationships,” Wright said.

Participation in the program has doubled every year since the program started five years ago, Birch reported. So far, more than 60,000 couples have participated in the training.

Meanwhile, an attendee gave a full-fledged endorsement of the program’s value after attending a recent Strong Bonds session at Fort Sam Houston, Texas.

“This is the first time since getting back from Iraq in April where I have felt that I am capable as well as confident enough to lead my family in a loving and caring environment,” he said. “The tools that I have learned will serve us a lifetime. This should be mandatory training for all married couples.”

It also has an important impact on a soldier’s decision to re-enlist, Birch said. Quoting other Army leaders, he said, “The Army recruits soldiers, but it retains families.”
Posted by Dondi West at 1:31 PM